skip to main | skip to sidebar

A week in December

A Week in December
Sebastian Faulks

This is the first Faulks book I've read. I'll probably try another because although this one was a bit disjointed, it kept me interested.

It tells the story of several British families over the period of one week (the week before Christmas) in 2007. Sadly, I could not identify with any of the families, they were all strangers to me. It begins with the wife of a newly elected M.P. planning a dinner party to show off her husband and to put him in front of powerful/famous people.

There's a powerful hedge-fund manager, who you just cannot like, a Yorkshire/Scottish/Asian family, rich and famous for their 'British' pickles, and several others too forgettable to describe. There are two man backgrounds to the story in my mind: the collapse of British banking caused by greed an self-service and terrorism. The terrorism comes from the son of the the Asian family - whilst his father prepares to attend the palace to receive an MBE (or such) his, son is in France buying bomb ingredients. 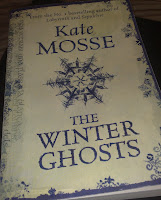 I enjoyed reading Mosse's first book Labyrinth so much that we visited Carcassonne (I'd wanted to go anyway, it sounded so 'French') a few years ago. On that holiday, I chose to read Sepulchre, another of Kate Mosse's books, set in a similar area of Languedoc - we were even able to visit the villages detailed in the book, while reading it! (TOURISTS!!!). I wasn't as thrilled about book two, but it was a good enough read. [I blogged this at the time: http://dsugblog.blogspot.com/2008/08/summer-reading-france-2008.html]

Winter Ghosts therefore, was one of those books I bought and set aside to read in comfort and once again, in France (but the north this time).

The author admits at the end of her book, that the plot was originally published as a short story. She had re-visited it and re-published as a novel.

I nearly gave up a few times. Almost a third of the book is pure fluff, I never really felt any link with the main character until he got to the (fictional) village and met people there. From here on, the story was fine and enjoyable - but the first third ---- Nah!

I'm sure thee will be a clamour for Citadel when it's released in September, but I'm not sure whether I will be one of the clamourers!
Posted by David Sugden at 9:31 am No comments:

The Redbreast
Nemesis
The Devil's Star
... [The Oslo Trilogy:]
By ... Jo Nesbo

My friend Jim told me about Jo Nesbo, he said I'd enjoy reading his books. Jim won't just read any old rubbish, so I took him up on his recommendation.

The author is Norwegian; the translation is by someone in East Anglia. The stories are great.

Although each book has 'The Next Stieg Larsson' plastered on the front, the only resemblances I can see between the two are that A) the author is Scandinavian and B) the action takes place in Scandinavia (Oslo and Norway, as opposed to Stockholm and /Sweden) - oh, and the stories move on at a cracking pace. I enjoyed all three (in fact I haven't quite finished the third).

The main character is Harry Hole, an Oslo policeman who get promoted to 'Inspector' very early on in the story. Harry is an alcoholic and doesn't seem able to stay sober long enough to keep a relationship together; and he isn't too bothered by 'rules'. Although each book is self contained, each one follows the previous one and I'm looking forward to some sort of denouement now, as I reach the end of book three.

Like many other great fictional characters, Harry is difficult to understand yet easy to admire. He smokes, he drinks and he has a touch of Lee Child's Jack Reacher about him. I'm looking forward to reading the next three books later in the year.
Posted by David Sugden at 8:33 pm No comments:

I assume that World Book Night 2011 was the first of it's kind. I've certainly not heard of it before. See: http://www.worldbooknight.org/

The idea was that people volunteered to distribute one of the twenty five book titles listed amongst their friends. Being a little careful and not reading the rules properly, I didn't volunteer for this as I thought that I would have to buy the books myself and circulate those! Mmmmm!!!! The list included several books I've previously read: Killing Floor, by Lee Child (I've read all his books), The Curious Incident of the Dog in the Night-Time by Mark Haddon and Life of Pi by Yann Martel. Other titles listed, which I'd started but couldn't get into (or have forgotten reading) are: The Prime of Miss Jean Brodie, Toast by Nigel Slater and Cloud Atlas by David Mitchell.

I suspect that any readers versed in the doings of Inspector Morse and his sidekick Lewis (http://en.wikipedia.org/wiki/Inspector_Morse) will recognise the set-up straight away: older detective type, assisted by younger, often mistaken/outspoken type (I never watched Morse above a couple of times, so apologies if I got that wrong).  Couple this set-up with a Cadfael-like http://en.wikipedia.org/wiki/Cadfael setting (although some century's later) and you're ready to go.

Set during the period following Anne Bolyn's execution Matthew Shardlake, a lawyer, is sent by the powerful Thomas Cromwell, vicar general (who Henry VIII later had executed for finding him an ugly wife?), to solve a murder at an Abbey some way away from London on the south coast.

I enjoyed reading the book although it took me some time to get into the unusual set-up and setting. The Morse - Lewis thing doesn't hold out, but you'll have to read it to find out. Would I read it again? - no. Would I read the follow-up book? - probably.
Posted by David Sugden at 9:01 pm No comments: 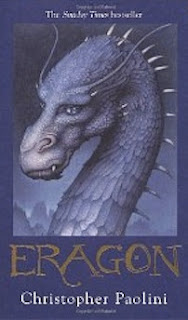 Just before Christmas, I was invited to watch the movie Eregon. That wasn't something I'd normally have looked forward to, but the Christmas spirit (literally), good company and a relaxed atmosphere made it something I was prepared to put up with.

How wrong could I be! The film drew me in and I was thereby introduced to the Inheritance Cycle of books. Having seen the film, I was offered the Eregon and Eldest Omnibus to read and I devoured them. They were rollicking reads and I couldn't put them down.

The stories are based on a traditional battle between good and evil and involves dragons, elves, dwarves, Urgals, humans and magic in a land that has a passing resemblance to Middle Earth. As far as I can tell, the author was 19 when his first novel was published so it's forgiveable that there are some echoes of Tolkein's major works in here (they dispel as the books mature).

Eregon finds a Dragon egg, which hatches for him. This binds them together forever and Eregon becomes a Dragon Rider. He is trained by Brom who we find out later is an ex-Dragon Rider and founder of the Varden - determined to bring down the evil Galbatorix, who has wiped out all of the other Dragon Riders and who holds the Empire under his thumb.

Elves and Dwarves and their histories are intertwined throughout these three books. I've just finished the third - Brisingr - and whilst it's a little bit drawn out, it finishes on a high note, setting us up for a fabulous fourth book - coming soon. 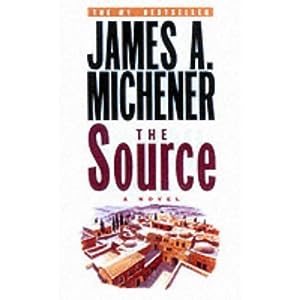 This book was first published in the 60's. It had completely passed me by until it appeared in my Amazon 'Wish List' last year. I don't remember putting it there but must have because there it was.

Gail (Sis in law), bought it me for my birthday last December stating that she'd worked on a kibbutz close to where this fictional history takes place. Although fictional, it is built around historical fact and those thing history suggest.

Starting with Ur, a caveman the history races through thousands of years to finish with Israeli Independence in 1948. Despite the very tiny print and the fact that Michener's prose is not the easiest to read, I could not put the book down. I learned so much about the development of land and religion in the middle East - things I would not have known (or believed) without reading the book. Did you know that the Greeks held sway over what we knew as Palestine long before the Romans? Or, that pretty much all of Judaism was wiped out in the area only to be repopulated by later expulsions from Europe?

Well worth a read.
Posted by David Sugden at 3:02 pm 6 comments:

Honour and the Sword - A. L. Berridge

This has been a cracking read.

Following my disappointment with the Kuzneski book, I was looking forward to something as entertaining and riveting as other previous reads, which I have still to blog about :-(

This is Lousie Berridge's first novel http://www.louiseberridge.com/ but it's a humdinger of a read. In the book, set in the 30 years war that ravaged Europe in the 17th Century, a young French landowner (I suppose we'd call him a squire) becomes orphaned at a young age and we follow him through his growth to manhood. He is rewarded for his tenacity by the love and admiration of his people (his peasants I suppose).

I also like the fact that she's English, has obviously been to France and spells words like honour with a 'u', and not a 'gotten' to be found.

It looks, from the Berridge web site, that this is only the first of a yet to be written and published series following the young squire though this dangerous period of European history.

I'm looking forward to the next.

Wordle from next book (with the publisher)
Posted by David Sugden at 2:31 pm 1 comment:

It's been a while since I actually recorded the books I've read. I'd stopped because I was a) too busy and b) Blogger attracts SOooo much spam.

However, I may well start again.

I'm currently reading a book by Chris Kuzneski - The Secret Crown and so far, it's utter crap!

As far as I can see, it's a I'm-laid-on-a beach-and-will-read-anything book and certainly, compared to me more recent reading (see upcoming blog posts) it's dreadful. Now, I don't set out to be the be all and end all guru of book commentary but I seriously doubt if I will get through it. There's no plot to speak of (that I can see yet) and the too main (very hunky ex 'super secret' service guys) have so far spent their time teasing each other in a sort of pseudo childish/butch way. If these guys are killers why is the plot not visible yet and why are they acting like big girl's blouses?

If I find I'm wrong and it turns out to be good - I'll come back to this.

To come:
The Source by James A. Michener
Eragon and Eldest by Christopher Paolini
I Shall Wear Midnight by Terry Pratchett

Continuing The Secret Crown - it didn't get any better, in fact if anything it got worse. Utter rubbish!

David
Posted by David Sugden at 5:12 pm No comments:

David Sugden
Huddersfield, United Kingdom
Hi, This one of what is now becoming a suite of dsugden blogs. My intention with this blog is to focus on books I've read and possibly music I've heard. I will also use the blog(s) to experiment with what can and can't be done with Blogger

The books and papers read